[Jesus] is the refulgence of God’s glory,
the very imprint of his being,
and he sustains all things by his mighty word.
— Hebrews 1⋅3

I am the Alpha and the Omega, the first and the last, the beginning and the end.
— Revelation 22⋅13 (spoken by Christ)

The English word religion comes from the Latin religio, whose roots re+ligare mean “to tie/draw-tight/close-the-contract again”. This implies that a bond between God and us has been broken, and needs to be repaired. 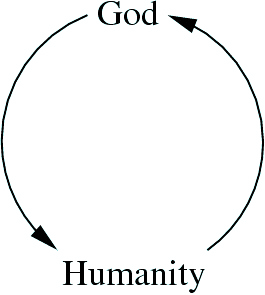 Christianity teaches that this separation is caused by a fundamental choice on humanity's part for selfishness. We are born broken, and cannot repair ourselves. Our union with God can be repaired by God alone, in Christ. This union is possible only if Christ is both human and divine: Christ brings about something new, something more glorious than we had before! As St. Paul writes, we shall bear the likeness of the man from heaven. St. John writes that we shall be like God, for we shall see him as he is. St. Peter writes that we will participate in the divine nature. As such, a Christian ought to live not as as though s/he resembles the dust, but as though s/he resembles God!

Be perfect, as your heavenly Father is perfect. — Matthew 5⋅48